Borrowers of accessibility apps at our Technology Lending Center can try them out for free, thanks to the iPod Touch.
Illustration by Guess Who, via Wikimedia Commons.

With all those cool new Apple iPhones, you know, such as the amazing new iPhone 11 series with all the photo and video goodies that come with it, why in the world would anyone want an iPod Touch? And why would a New Jersey resident want to borrow one from the Technology Lending Center, even at no cost? The reason? One doesn’t need a phone with a camera to sample assistive technology apps and learn what they can do.

With this sleek mobile device, users can download thousands of applications with the tap of a finger. These applications can help those with autism, ADHD, dyslexia, and many other disabilities. It has been said that for most of us, technology make things easier. But for people with disabilities, assistive technology makes things possible.

Apps and programs we have used include the following:

We can assist anyone in finding the app for their unique needs. 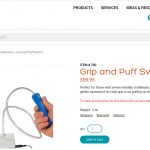