Nurturing others is a way of life for Residential Support Specialist Charity Shaw. Currently, she’s working at the Jacksonville group home. “These are my guys.” Charity shares a special connection with each of the young men who live there. “Scott loves music.” If Scott is out of sorts or acting out she’ll say, “Why don’t you play some music?” or she’ll remind him that his mother will be visiting on the weekend. “Scott loves his mom.” If all else fails, she knows a warm shower will calm him down. 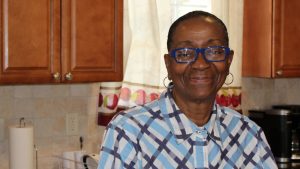 Charity Shaw is a residential support specialist working at a group home in Jackson, NJ

“John loves to run and jump. He also loves McDonald’s.” She knows he can be a picky eater, so she sits next to him at the dinner table to make sure he eats his vegetables. It may take some negotiating, but she says he eats them. “Ethan can’t talk. So I have him point to what he wants. He loves a glass of milk and to watch TV. He likes cartoons and the news. If he’s quiet, it’s on the right channel. And if it’s not, he’ll let me know.”

“Now Mike, he loves to go the Nike store; he’d go everyday if we let him and shop for expensive sneakers.” Mike also likes a chef salad. When Charity makes spaghetti and meatballs for dinner, she makes Mike one giant meatball, because that’s what his mother sometimes brings for him.

Charity enjoys cooking and has made many connections with consumers through food. Since she began at the agency in 2012, she has provided care in four different group homes and two Project Freedom apartments. Sometimes, when she’s subbing at home she’s worked in previously, she’ll get requests. “Levi in Robbinsville loves my banana pudding. He always asks me to make it. He says it tastes like the kind his mother used to make. Pappi loves when I cook on Sunday, because I usually make two desserts. He likes my chocolate cake.” One Thanksgiving, she cooked the men at Newton a complete turkey dinner. “One of the other staff asked why I would do that because they were all on blended diets, and I said, ‘Because it’s Thanksgiving.'”

Her means of connecting isn’t always about food. “Gene in Newton loves it when someone watches Family Feud with him. He’ll look at you and then at the TV and then look back at you to see if you’re still there. When he sees that you are, he’ll smile…” She knows what her residents like.” Pappi likes looking at magazines and having you tell him what’s happening on the page.” Charity says, “It’s important to find out what the residents like. You need to listen and if the residents can’t talk, you have to have them show you. Do whatever you can to establish a way of communicating.”

Whether she’s being a compassionate caregiver, a listening ear, or a mother-figure, Charity treats the men and women she serves like she treats the members of her family. “They feel the love. They know I care.” A mother to three of her own, Charity says she raised eight children; there were several nieces and nephews who needed her care. Charity also has three grandchildren to whom she is very close. Recently, she welcomed a great-grandchild into the family. 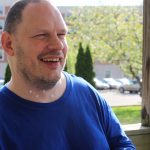 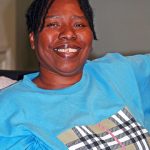 Caring for Others Is Both a Gift and a Calling for CorchiaUncategorized
Call Now ButtonDonate Now!
X