With a Dream and Determination, Wayne Kean Builds a Business: Assistive Technology Is There to Help Wayne Kean (LEFT) operates a coffee shop in one of the state’s office buildings in Camden, NJ. Since he has a condition that has left him blind, he uses assistive technology to help keep track of inventory and work on his computer. Assistive Technology Specialist Norm Rothstein (RIGHT) has been working with Wayne to make sure he has the right tools to perform his job and he knows how to use them.

“It’s not the end of the world. There’s so much more to do,” says Wayne Kean, speaking about the double life-altering hardship of becoming blind and having to quit school, and dealing with the family’s loss of their assets when his father’s hardware store burned to the ground. At that time, Wayne was working for his father, helping with warehouse work and anything else that needed to be done. Losing that stability and his eyesight meant Wayne had to figure out how he would continue to earn a living. “My father instilled independence,” he says.

Rebuilding a Life… and a Business

For Wayne and others like him independence often means two things: knowing where to turn to for assistance and self-advocating for the services he needs. Like his father, Wayne dreamed of owning and running his own business. Wayne enrolled in the Business Enterprise (BE) program the New Jersey Commission for the Blind and Visually Impaired (CBVI) runs. The 21-week program trains CBVI clients for what they need to know to run a small community-based vending-machine, newsstand, or snack bar business located in a federal, state, or municipal building. “If you have the smarts, the stamina, BE is the place,” he says. Wayne named his business Kean’s Kitchen. There, he takes a great deal of pride in providing the best possible customer service. “It doesn’t matter what you sell and how you sell it. What matters is how you sell yourself,” he says, reflecting on the work ethic he cultivated while working in his father’s business. “It’s not about the money, but about the people,” says Wayne.

Wayne’s quest for independence extends to his recreational life as well. No longer being able to play football has not stopped him. “You have to reinvent yourself,” he says, which is why he is now a long-distance runner, using his cane to guide him. He runs in the “smaller races,” those of 10 to 20 miles. Nevertheless, Wayne says he runs not to win the race, but to enjoy the people, of whom he has met many. “It is wonderful being with people like them.”

…with Some Help from Assistive Technology

Having set an objective, Wayne was ready to consult Assistive Technology Services at Advancing Opportunities. Assistive Technology Specialists are on hand to help people with disabilities like him identify solutions to overcome the barriers that would otherwise keep them from working. Norm Rothstein, Assistive Technology Specialist, supported Wayne after his CBVI evaluation, providing him with the 15 hours of training on the Microsoft Office programs he needed. To gain access to the software on his computer, Wayne uses two programs from Freedom Scientific. The first, JAWS (Job Access With Speech) is a sophisticated text-to-speech screen reader. The second, OpenBook, reads printed materials, such as magazines and bills, and converts them to speech. All in all, Wayne has had to learn all different keyboards on his laptop, as well as iPhone touch screens; he is currently trying to learn more. “To be able to do all this gives so much freedom,” adds Wayne.

“Norm makes learning fun,” says Wayne. “He’s very good at what he does.” Norm still provides Wayne with ongoing support to complete weekly reports. Plans for Norm include teaching Wayne new ways to use his iPad, which has an app for swiping credit and debit cards. “Norm is a people person. He makes the learning fun. He says what he means and means to what he says,” says Wayne. “He gives me that energy, so I want to do everything, especially after fatigue sets in after spending the day interacting with people.”

Assistive Technology and ACC for the Blind 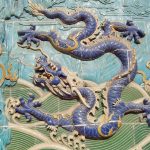 How to Play Your Dragon… For Full Participation and IndependenceAssistive Tech Tuesday, Assistive Technology, Testimonials 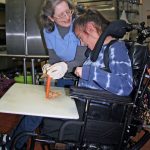