A New Controller Brings the Joys of Gaming to Everyone

Soon after information about this revolutionary device was leaked to the public, Microsoft made its own announcement.

Granted, life is not all fun and games. Assistive technology, as we have pointed out in this space, exists to place everyday tasks in reach of persons with disabilities. And that makes life all the more enjoyable. So, why not have the best of both worlds – making life more enjoyable through games. Microsoft did exactly that in creating an adaptive controller for its popular Xbox video game consoles. There’s no hiding events from active gamers. After news of this device was leaked, Microsoft made a formal announcement of the launch of its new adaptive game controller.

What Makes It Work

Think about common objects, such as doorknobs and cellphones. And, yes, game controllers. For people with limited mobility or those who cannot use both hands, these physical disabilities present tremendous challenges. (Game controllers have continued to grow increasingly sophisticated, a far departure from the single joysticks superannuated video game enthusiasts recall from playing Pong on black-and-white TV sets or their first Atari consoles from Sears or Radio Shack.)

The story of the Xbox adaptive controller, however, goes back several years, to 2014, when a Microsoft engineer heard about Warfare Engaged, an organization that had been laboriously modifying controllers for wounded veterans. In 2016, Microsoft announced its “We believe gaming should be for everyone” vision. Indeed, both during the design and development of the Xbox adaptive controller, Microsoft consulted actual users and their occupational therapists. Though this final product is a work of sleek industrial art and design, its roots lay in rough concepts that were the products of hackathons.

The basis of the adaptive controller is Microsoft’s Xbox Elite Controller, whose flexibility allowed users to create many custom profiles. Based on the best practices of inclusive design, the new controller features a 3.5-mm USB jack (something no other controller has) to accommodate various assistive switches, buttons, and joysticks, including pedal switches for each control function. Although the jacks are on the back of the adaptive controller, small grooves enable one to plug the switch in without turning the device around. Furthermore, a specialized app allows one to remap the buttons to accommodate the specific needs of the gamer.  The main controller itself has two large circular touch surfaces, which are domed to make it much easier to run one’s hand over to activate internal buttons. 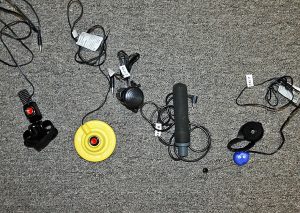 The new Xbox adaptive controller can accommodate a wide range of switches for many physical disabilities. 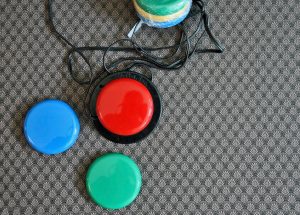 The new Xbox adaptive controller can accommodate a wide range of input devices, such as these Jellybean switches from AbleNet.

The new Xbox adaptive controller can accommodate a wide range of switches for an equally wide range of disabilities. Gaming is an interactive pastime. Certainly, the many game enthusiasts with physical disabilities want to participate fully and independently! Everyone can play. 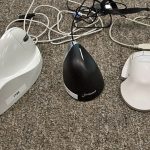 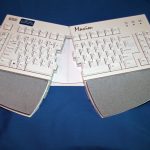