Blind people have for centuries needed assistance to read and write. John Milton (1608-1674) used his blindness to inspire the visions that made Paradise Lost and other poems such masterpieces. In this painting by Eugene Delacroix, he is dictating to his daughters. 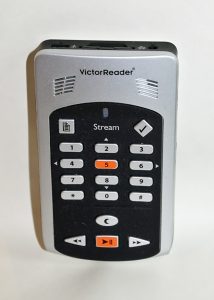 The Victor Reader Stream plays back digital versions of print media. The newer version is slightly smaller and lighter than this, the original.

Since 2011, the free Humanware companion software allows for easy access to the DAISY consortium: The NLS (Library of Congress National Library Service for the Blind and Physically Handicapped), Bookshare, and Learning Ally. In addition, Victor Reader users can enjoy books and music from iTunes and play text documents with built-in text-to-speech from Acapela.

Victor Reader has expanded! Victor Reader Trek adds GPS technology and capability to the already versatile Stream. During travel, the user need only to press a single button to learn of the nearest physical address, compass direction headed, a description of the nearest intersection, and the next step of the route. Returning to the stream is an easy toggle away.

The Assistive Technology Center at Advancing Opportunities can make the Victor Reader Stream available for a free loan to New Jersey residents with disabilities. 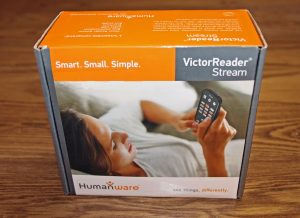 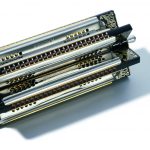 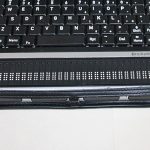